Today I remember my Uncle Capt. Henry Doyle O’Donnell who served in World War One, the Great War of 1914-1918. He was the son of my paternal grand mother Ambrosine Albertha nee Ramsay and her first husband Henry William O’Donnell of Jamaica, West Indies. 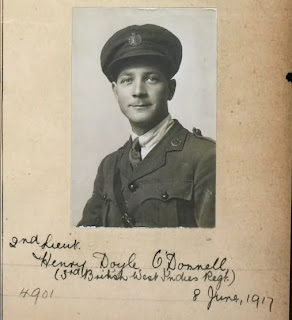 Henry Doyle O’Donnell was born on October 16, 1894 at Montego Bay in the parish of St. James, Jamaica. His father died in about 1900 and his widowed mother married my grandfather Donald Harcourt Campbell in about 1902.
On January 7, 1916, Henry sailed from Kingston, Jamaica with the Second War Contingent for training in England. He was a 2nd Lt in the 3rd Battalion of the British West Indies Regiment and was attached to the Royal Flying Corps (RFC), a forerunner of the Royal Air Force.
On June 8, 1917,   Henry received his pilot’s license (No. 4901), at Military School, Ruislip, having taken his certificate on a Maurice Farman Biplane.
Later, Henry met Elizabeth (Dorlie ?) Gardiner who he married on June 24, 1917 at Musselburgh, near Edinburgh, Scotland.
Henry survived the war, but died in 1924, at which time he held the rank of Captain. He is buried in the London Borough of Richmond upon Thames, England at the Richmond & East Sheen Cemeteries.
May Capt. Henry Doyle O’Donnell rest in peace.