The federal government led by Prime Minister Stephen Harper has fallen and we’ll be going to the polls in early May, likely May 2 or 9. The Conservative minority government lasted for about two and a half years, which I believe is pretty 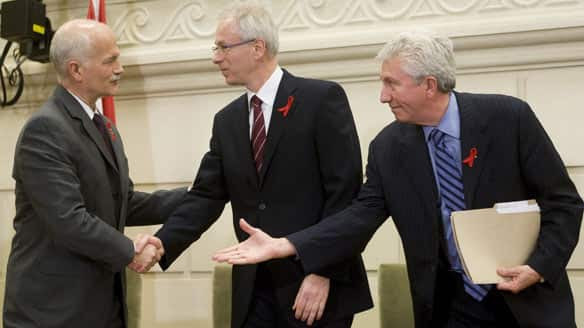 There seems little doubt PM Harper will have to win a majority of seats to remain in power—a Liberal-NDP coalition with some sort of participation by the separatists Bloc Québécois will make sure of that.

Bloc Québécois leader Gilles Duceppe points to a 2004 proposal in which the then opposition leaders were to write to the governor general as a group and remind her that opposition leaders were ready to try and form a government should the minority Liberal government under Paul Martin fall. Duceppe and New Democrat leader Jack Layton and, I suppose, Liberal Leader Michael Ignatieff would like us to see that rather simple letter as being a “coalition” agreement equivalent to the formal coalition agreement their three parties hatched up in 2008 to defeat the Tories.

The 2004 document is a far cry from the formal, official coalition proposed by Liberals-NDP and supported by written contract by the Bloc to support the Liberal-NDP coalition on confidence motions for 18 months. Cooperation between parties, as suggested in 2004, is a time honoured tradition in Canada, but is not a coalition in the formal sense as was envisioned by the opposition in 2008—far from it.

In late 2008, the Liberals, NDP and the Bloc Québécois signed an agreement with the following details:

Nothing like that was ever proposed by the Tories in 2004. Neither Jack Layton nor any of his caucus were guaranteed a seat at PM Stephen Harper’s cabinet table and the NDP caucus was not invited to sit side by side in the House of Commons.

To suggest equivalence between the two situations is misleading and mischievous and suggests a lack of integrity one finds distasteful in leaders of any stripe in Canada.

There’s nothing wrong with a formal political coalition, such arrangements are quite within the Westminster tradition. The parties involved, however, owe it to voters to inform them during the campaign of their true intentions. I believe most Canadian voters would take a dim view of having hard-core socialists holding key federal cabinet posts with a separatist party guaranteeing the arrangement with support on non-confidence votes.

If Canadians wanted socialists and separatists to control key cabinet posts and directly influence government policy, they’d vote to put them there. I believe a very large percentage of Canadians would worry enough about the quid pro quo of such a coalition that they’d vote in a way to avoid the chance of its formation.

To put it kindly, Michael Ignatieff has been circumspect regarding the likelihood of a coalition between his Liberals and the NDP or Bloc. Listening to Layton and Duceppe recently, however, there is little doubt they favour such a coalition.

I believe the ethical thing for Ignatieff to do now is to make an unambiguous statement clarifying his party’s intentions in this regard. Simply put: does he intend to lead a coalition, yes or no.