In the latest move in Quebec’s so-called identity or reasonable accommodation debates, a motion passed unanimously in the Quebec legislature 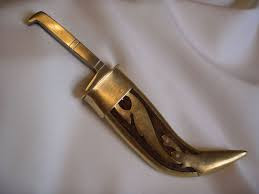 to ban the Sikh kirpan from its premises. All 113 MLAs present, including Premier Jean Charest, agreed that the Sikh religious symbol should be banned in the legislature, supporting security personnel who recently blocked visitors from entering the building while wearing their kirpans.

The kirpan is, of course, allowed in the House of Commons, and at least one Liberal MP wears it on a daily basis, but the provincial body sees the issue differently.

The issue is one wherein rights are in conflict: freedom of religion with secular law/regulations.

I’m all for cultural accommodation and include religious accommodation here. When such accommodation conflicts with secular law, however, my position is always to side with the law, recognizing that in a secular state freedom of religion must have its limits.

Where cultural or religious practices conflict, not with the law, but with normal or traditional practice, I believe we can and should be more accommodating. Even then, however, there are limitations to the extent to which I believe we should bend. Certain Canadian practices and norms are so central to our identity, I say that religious and cultural practices must give way to them.

Here I include the wearing burkas or other garments that cover the face and body making identification of the wearer impossible. Cover whatever else you chose, but I want to be able to see peoples’ faces. Some of my neighbours wear headscarves for modesty—they are Muslims from the United Kingdom—and I see that as acceptable, but I draw the line when the face is covered in pubic.

Many defend kirpans claiming they are not weapons, but clearly some of them are. In fact, some Sikhs apparently will not wear the purely ceremonial daggers, insisting that only fully functional ones are true kirpans. It is as disingenuous to claim kirpans are never used as weapons for clearly they sometimes are.

In September 2008, Montreal police charged a 13-year-old student with threatening his schoolmates with a kirpan and the boy was found guilty. And in April 2010, the temple president was stabbed in the abdomen with a kirpan at the Sikh Lehar Centre in Brampton, Ontario.

In cases where small folding knives are banned, then so should the kirpan. If the Houses of Parliament wish to make exceptions of the kirpan, then it is their prerogative to do so. Though I don’t see that my wife—who had her penknife confiscated at the doors of the House—is any more of a danger with her less-than-3-inch penknife than is our kirpan-wearing MP. But such is the unevenness of the application of our laws in Canada: individual who are members of the majority lose rights; members of minority groups gain rights.

It’s nice to see the Quebec legislature providing some clarity on this issue.