Egyptians clash in Cairo: a sign of what’s to come?

The situation in Egypt might be worsening as we hear today of violent clashes between protesters and supporters of President Hosni Mubarak. The situation there may yet turn into a bloodbath. It does not seem in 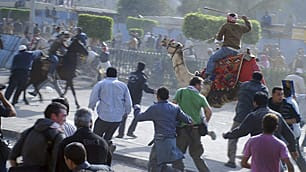 the nature of Arab countries to weather important changes and transitions in a non-violent manner.

Say all you want about American involvement in Iraq—assign all the blame to them for every negative thing that has happened there—and you’re still left with the seeming inability of Arabs to settle major political disputes without resorting to violence. The level of Arab-on-Arab violence in Iraq has been tragic, but seemingly inevitable.

Listening to Egyptian expatriates on the Michael Coren Show Tuesday evening (video not yet available), I couldn’t help wondering if panelists’ Pollyanna-like view of recent developments is widely shared on the streets of Cairo. Democracy is breaking out and individual freedoms are about to become the norm seemed to be their common sentiment, which Coren didn’t seem share; he was far more pessimistic of a democratic outcome.

I’m with Coren on this. I’ll be very surprised if the situation in Egypt ends well for the ordinary Egyptian. Democracy had to be forced on Iraq and there it’s tentative at best, even though it’s been guaranteed by the presence of tens of thousands of U.S. and British troops in that country.

I hope for the best, but fear the worst.