Stockwell Day might not have distinguished himself during his tenure as leader of the Canadian Alliance, however, he has in the other roles he has had since being replaced by Stephen Harper. The Okanagan-Coquihalla MP has given a stellar performance in each of the two portfolios to which the PM has appointed him 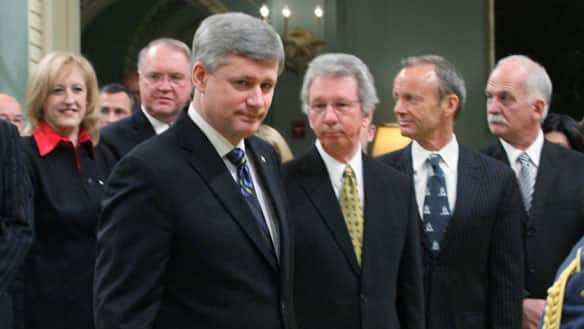 Today, the prime minister has reassigned Mr. Day from International Trade to Treasury Board. PM Harper had this to say about the new appointment:

“As we look ahead to the end of our time limit in the stimulus programs, and for the need of deficit reduction once the economy has recovered, it will be essential for government to constrain the growth of spending.

“The president of the Treasury Board plays a critical role in overseeing government expenditures. I’m assigning this task to one of the most senior members of the cabinet, a former provincial treasurer who has distinguished himself in every portfolio he has held and I refer, of course, to the honourable Stockwell Day.”

Praise indeed and much deserved.

Mr. Day be missed at Internal Trade, especially with the Canada-EU trade talks underway. Personally, I’m less a fan of his replacement, Peter Van Loan, MP for York-Simcoe in Ontario. PVL’s no light-weight though, and I appreciated his efforts in bringing about the merger of the federal PC and Alliance parties.

PVL served briefly as president of the PC Party of Canada, before resigning over disagreements with leader, Joe Clark. I can relate to that. I left the federal PCs in favour of the Reform party when Joe became leader the second time around.

Guess I shouldn’t be too hard on Peter Van Loan.