Time for housecleaning at Queen’s Park

The Ontario government’s Auditor General Jim McCarter released his much anticipated report into the eHealth Ontario spending  scandal, and the situation at eHealth and in the Ministry of Health is far worse than even a cynic like me had imagined. The bottom line is, according to the audit report:

“Ontario taxpayers have not received value for money for this $1-billion investment.”

Perhaps as troubling is Mr. McCarter’s claim that senior health bureaucrats tried to delay access by his investigators into eHealth for an audit in the 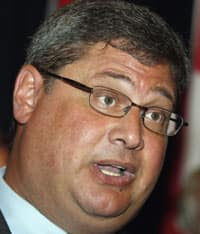 For many weeks now the opposition parties have been pleading with Premier Dalton McGuinty to do the right thing and fire the minister of health. But Premier McGuinty refused. Finally, on the eve of the release of this scathing report, Health Minister David Caplan announced that he is stepping down. Shortly thereafter, Premier McGuinty announced that Children and Youth Services Minister Deb Matthews will take over Caplan’s portfolio.

And what about Deputy Premier George Smitherman? Shouldn’t he resign also? After all, he served as health minister for five years, and Mr. Caplan only took over from him about a year ago. Rumours have been circulating that George Smitherman plans to run for mayor of Toronto—just what the citizens of Toronto need.

The lack of financial oversight by Premier McGuinty is shocking. And let’s not kid ourselves, these practices are not limited to the health ministry. The only way the people of Ontario will have any confidence that the root of the corruption has been dug out is for there to be a full public inquiry. As expensive as these inquiries can be, there are apparently billions of misspent taxpayers’ money at stake, and we need to know what the heck is going on.

To get just a taste of the extent of wrongdoing by McGuinty’s pals, see here, here and here.