The UK’s Daily Telegraph reports that an SAS team of up to 14 men have been training Libyan special forces in counter-terrorism techniques. The paper quotes an SAS source which suggests a 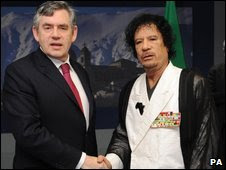 possible link between this training program and the release of Lockerbie bomber Abdelbaset Ali al-Megrahi.

The British Ministry of Defence does not comment on the activities of their special forces, and neither confirmed nor denied the Telegraph’s report. And, as one might expect, a British Foreign Office spokesman said the suggestion of such a link was untrue. The Foreign Office, however, apparently admitted that there is ongoing defence co-operation between Britain and Libya.

Given that Tripoli supplied the IRA with explosives and weaponry during the Northern Ireland Troubles and is generally considered to be responsible for the downing of a civilian airliner over Scotland with the loss of 270 lives, can this report be accurate? If it is, I really have to question the judgment of the current rulers of Britain. Don’t morality and principles play any role in British foreign policy, or is it all Realpolitik?

I like to think of myself as a pragmatist, but I’d really would have to have held my nose to have made an agreement like the one the British apparently made with Libya. The memories of the carnage during the Troubles in Northern Ireland and the terrible human toll when Pan Am Flight 103 was blown up over Lockerbie are too fresh for me to consider joint ventures with a country that played such sinister roles in those tragedies.

The SAS is arguably the most deadly fighting force on the planet. It makes me cringe to think they are making the Libyan military any more effective than they already are.

So much for the vaunted British fair play.

Email ThisBlogThis!Share to TwitterShare to FacebookShare to Pinterest
Labels: In the News, International Politics, Politics, Security and Terrorism