In an unexpected move, Prime Minister Stephen Harper has appointed Manitoba’s long-serving premier to the post of ambassador to the United States—our 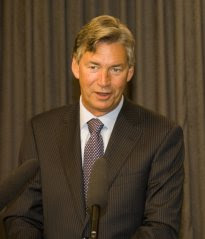 country’s most important and prestigious foreign post. Doer, 61, will replace Michael Wilson who has served as our man in Washington since February 2006 when he became Canada’s 22nd representative to the United States.

Ambassador Wilson, 71, stressed that the decision to step down as Canada’s envoy was initiated by himself and not the prime minister’s office. In an interview Friday, he said he believed Ottawa needed an ambassador who would remain in Washington for the duration of the first Obama administration—a renewed commitment he wasn’t prepared to make after spending three and a half years in the job.

“All good things come to an end. And I have, I must say, some mixed feelings leaving,” said the ambassador.

Indications are that Doer, a former corrections officer, union leader and MPP, will hit the ground running in Washington.

As premier of Manitoba, Gary Doer has undoubtedly built a list of senior-level American contacts, particularly among state governors he has worked with on issues like climate change and border security. He has formed cross-border alliances with several U.S. states and signed greenhouse gas reduction deals with California, Kansas, Iowa, New Mexico, Oregon, Arizona and Minnesota.

Doer played down the ideological differences between himself and his new boss, PM Stephen Harper, saying:

“I was extremely impressed that he [Harper] did reach across party lines. I also believe that, as premiers, we take our uniforms off when we go into the meetings because we’re representing all the people of our provinces as the prime minister is. He’s representing all of Canadians when he meets with the president of the United States.”

As might be expected, the federal NDP praised Doer’s appointment. There has also been strong praise from Liberal ranks.

Sounds like a positive move to me. Doer is more a small “l” liberal than he is a socialist. And given his apparent flair for international relations, I believe he’ll do just fine.

Posted by cycroft at 5:12 PM 2 comments: Links to this post

Apparently, the station’s owner, Astral Media is saying the job losses are about taking the station in a new direction. Sherry O’Neil, general manager of Astral’s Toronto branch, says the station will retain its news-talk format and adds that the move had nothing to do with the economy and that any money saved will be put back into the station.

I find it interesting that Tarek Fatah has apparently kept his job while Michael Coren his co-host loses his. And I’m surprised about the Motts—I thought they were a fixture at the station.

Michael Coren’s TV show on CTS moves from 8:00 p.m. to 6:00 p.m. in September—never a positive sign when a show is punted from primetime in Canada’s largest market. That coupled with CFRB’s latest move could indicate that Coren is wearing thin with many who find his dated view of the world rather tiresome. He can be an overbearing bore at times, and he never really jelled with his co-host Fatah.

Nevertheless, I’m sorry to see him go. One less conservative voice on left/lib-dominated Toronto radio is never a good thing. He will be missed.

Posted by cycroft at 4:02 PM 10 comments: Links to this post

Email ThisBlogThis!Share to TwitterShare to FacebookShare to Pinterest
Labels: General, In the News, Social Issues

The death of Edward “Ted” Moore Kennedy, the famous liberal senator, has brought both praise and some scorn from across the United States and throughout the world. His passing marks the end of an era during which the Kennedy clan—most notably its three famous brothers: John, Robert and Edward—fascinated a nation and the world beyond it with their ambition, style, idealism and tragedies.

I cannot fathom what drives commentators like journalist/broadcaster Michael Coren to so denigrate the achievements of this man. Without question, it is hard to forgive the man for the part he played in the death of Mary Jo Kopechne—when he virtually got away with manslaughter. And his private life has left much to be desired by one who should have been a role model for his fellow Americans.

However, do his well publicized misdeeds so overshadow decades of worthwhile service in the U.S. Senate that we should dwell almost exclusively on them? I think not.

His legislative legacy includes health insurance for children of the working poor, the landmark 1990 Americans with Disabilities Act, family leave and the Occupational Safety and Health Administration. He was also key to passage of the No Child Left Behind Education law and a Medicare drug benefit for the elderly, both championed by Republican President George W. Bush.

And although Republicans would open their wallets to fight anything Kennedy stood for, many of them respected and befriended him. To the end, Ted Kennedy remained the Senate’s foremost liberal and one of its legendary dealmakers. He’ll be missed in that august body.

As Democrat Patrick Leahy of Vermont said, “He [Kennedy] really worked at becoming the best senator he possibly could. And he did.”

Posted by cycroft at 4:01 PM 5 comments: Links to this post

Email ThisBlogThis!Share to TwitterShare to FacebookShare to Pinterest
Labels: In the News, Politics, US Politics

The National Post has a story about a U.S. District Court judge issuing a permanent injunction barring software giant, Microsoft Corp., from selling its word processor in the United States. And, apparently, this is no rogue judge sticking it to corporate America, but rather Judge Leonard Davis is upholding an earlier jury verdict in the case—strike two, so to speak.

This is a serious matter for the judge also ordered the Redmond, Washington company—the world’s largest software maker—to pay Toronto-based i4i Inc. nearly US$290 million in damages for willfully violating a patent held by i4i Inc.

The affected versions of Microsoft’s word processer are Word 2003 and Word 2007. They are an essential part of the ubiquitous Microsoft Office suite, which contributes about US$17 billion to the Redmond giant’s revenues.

Tyler,where the case was heard, is in Southeast Texas, which is reputedly the “patent troll” haven of North America. Patent holders have won huge judgments there against major corporations like Apple, Autodesk, Microsoft, National Semiconductor, Nintendo, Samsung, SanDisk and Sony. This is not to say, however, that i4i Inc.’s case is without merit. As technology pundit Joe Wilcox wrote:

“Even for Tyler, it’s unusual for a judge to issue an injunction prohibiting sale of a major product, particularly something as widely used as Microsoft Word. The injunction says something about the seriousness of the violation.”

Microsoft has been one of the most aggressive businesses when it comes to pursuing those who violate its software copyright. Won’t it be a delicious irony of sorts if it turns out that this anti-piracy zealot is itself a software thief.

We will, of course, see how this plays out in the next few months, but I’d not bet against i4i regardless of how deep Microsoft’s pockets are.

Posted by cycroft at 12:09 PM No comments: Links to this post