Toronto caves in to unions—taxpayers lose

The City of Toronto seems to have come to an agreement with its unionized employees, subject to ratification on both sides. 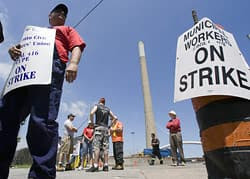 According to Blue Like You blog and reported on CFRB radio, details of the tentative deal have been leaked and, frankly, it doesn’t look good for the abused taxpayers of that city.

Apparently, the unions have won, or nearly so, on all points, most significantly: large pay increases without productivity guarantees and banked sick days for current employees—new hires will not get that option. This virtually guarantees a hike in municipal tax bills.

Yes, the real losers are the Toronto taxpayers who will not see a cent in tax relief to compensate for the basic services they have been denied for more than a month. In addition, their city will likely shell out millions in overtime payments to union workers to clean up the garbage and catch up on the backlog of work that the city management chose not to have done by replacement workers or private contractors.

As for that poor excuse of a mayor, David Miller, never was his ineptness and double talk more apparent as it has been in reaction to this tentative settlement. “Everybody has lost,” moans the Mayor, who also insisted the preliminary contract fits “within the mandate of the employee and labour relations committee.” What a lot of Bull.

How could the unions lose? They had their leaders at the bargaining table working for them, and on the other side they had David Miller doing everything he could to make sure the strike worked in their favour—no replacement workers, no outside contractors hired to do the work the unions refused to perform and total control by pickets over access to city property and dump sites.

A union-first mayor leading negotiations with greedy, power-hungry unions is a big joke on Toronto taxpayers. What a stinking mess.

Email ThisBlogThis!Share to TwitterShare to FacebookShare to Pinterest
Labels: Canadian Politics, Economy, In the News, Politics