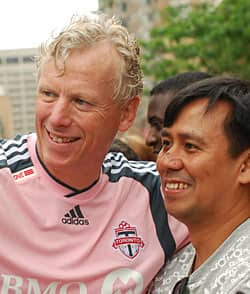 answer questions in public about what sort of tax increases, if any, might be expected if council ratifies the deal.

This is so typical of the David Miller administration of the city: tax payers and media barred from hearing the debate of the terms and consequences of the mayor’s capitulation to the 30,000 striking city employees.

And, how about this?

Earlier today we heard that the deal with the unions includes amnesty for those who committed vandalism and other unlawful acts while on the picket lines. Mark Ferguson, the union president of CUPE Local 416, cried triumphantly when addressing his members:

“The City wanted to terminate and prosecute those few who got a little excited on the picket lines. We made sure of amnesty for everybody involved.

“What happens in Vegas, stays in Vegas!”

Vegas perhaps, but this is Ontario, Canada.

When did David Miller become our chief law-enforcement officer? By what authority can he offer amnesty for any law-breaker? I understood that the police determined whether charges were to be levied, not the mayor. This is interference in police matters by an elected official and is wrong from any point of view.

Acts of vandalism and damage to property is a crime against society, and are serious offences that should be dwelt with by our police forces. And, now that Mayor Miller has obviously instructed the Toronto police service to overlook such offences committed on the picket line, Premier Dalton McGuinty should make sure that the OPP looks into the matter to determine if undue influence was brought to bear by elected officials.

Here’s what I believe happened.

Mayor David Miller wanted his union buddies to get the very best deal they could, but had not the balls to do it out in the open. So the mayor made public an offer that he knew the unions would not accept, figuring that a strike would be short-lived as residents called for him to end the work stoppage. Miller could then rush in to save the day with the much-enriched offer he wanted the unions to have in the first place.

But the mayor miscalculated. The residents of Toronto took his public statements and promises at face value and hunkered down to wait out the strikers. Miller never guessed that would happen. And as he saw the public mood turning against the union workers, he had to step in and save their skins.

Now he has to sell this tainted deal to 22 of his fellow council members. But not, of course, with the media and public listening in. This deal would never stand public scrutiny and Miller knows it. Better to force it through in private and “spin” it to the public later as a fait accompli.

The whole deal stinks as much as the streets of that unfortunate city.