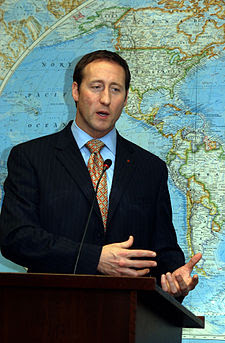 The recent news that our Defense Minister Peter Mackay said Sunday that he is more interested in keeping his job than becoming NATO’s next secretary-general is welcome news indeed.

I am at the point where I seriously doubt that there is enough value in membership in NATO to justify the cost to our country and to the young men and women who serve in our armed forces present and past.

Canadians were there at the birth of NATO. We were key drafters of NATO Articles 4 and 5, dealing with consultation and obligations. Article 2, moreover, was the result of Canadian insistence and perseverance, summoning alliance members to improve themselves and each other politically, socially and economically.

Canada’s early enthusiasm for the alliance it helped to form was not to last, however. After an initial burst of commitment that carried its military to Europe in the early 1950s, Canada’s enthusiasm waned, as it seemed to prefer to regard NATO as a political arrangement, while doing only as much militarily as was necessary to maintain some credibility inside the alliance. In fact, in 1969 Prime Minister Pierre Trudeau withdraw half of the Canadian force from NATO Europe.

Despite our lack luster support, since 1949 Canada has been the sixth largest contributor to NATO’s military and civil budgets. In 2005-06, Canada contributed some $160 million and 114 personnel. Moreover, Canada is the third largest financial supporter and contributor of personnel to the NATO Airborne Early Warning System and Control—a system that provides all-weather surveillance, command, control and communications to NATO air defence forces. Canada also provides low-level flying and mechanized battle group training grounds for its NATO partners at several Canadian Forces bases.

Perhaps most importantly, Canada currently has approximately 2,500 Canadian Forces personnel deployed in Afghanistan in support of NATO operations there. This results from our response to Article 5 obligations following the terrorist attacks in New York and Washington.

Article 5 of the North Atlantic Treaty stipulates that an external attack against one of the Allies is an attack against all the members of the Alliance. Consequently, after the Sep. 11, 2001 terrorist attacks on the United States, Canada immediately fulfilled its NATO obligations to support its ally. Since 2001, over 18,000 Canadian Forces personnel have deployed overseas as part of its role in the campaign against international terrorism—Canada’s contribution included naval forces in the Indian Ocean and an army battle group, which was deployed to Kandahar as part of the U.S.-led Operation Enduring Freedom.

Canada has now done its part for Europe and NATO. Tens of thousands of Canadian lives were sacrificed in the first half of the Twentieth Century for European freedom. And dozens of lives and billions of dollars are now being lost in Afghanistan, at least, in part because some Europeans will not come to our support there.

We are committed until 2011, and I suppose we must live up to that obligation. But after that, we must seriously reconsider membership in an alliance which does not seem to believe in mutual assistance. Europe owes Canada far more than it can ever repay, so why continue to accrue debts that will forever be unpaid?